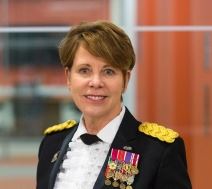 Wednesday, we will celebrate several dozen veterans and other members of the military community who have found new jobs with Comcast at its new call center in Spokane Valley. We will ask for the community’s assistance in finding more such employees. The center has grown from 0 to 450 employees since last July, and will move into larger quarters this summer in Liberty Lake to employ up to 750.

Retired Brigadier General Carol Eggert who joins us from Philadelphia as Comcast’s new Vice President for Veteran and Military Affairs.

Help us get out the word we’re looking for more veterans, Reservists. Guard members and military spouses to employ. Anyone can look up career opportunities with Comcast in Spokane at http://cmcsa.jobs/SpokaneWA

We are proud to name Shakira Shanks as the new Director of Customer Experience in Washington, where she will oversee customer experience for all lines of our … END_OF_DOCUMENT_TOKEN_TO_BE_REPLACED

We are proud to unveil our next Lift Zone project here in Washington state, a partnership with  YWCA Seattle | King | Snohomish to support four Puget Sound area … END_OF_DOCUMENT_TOKEN_TO_BE_REPLACED

“It’s important to recognize every ethnic group. I think that it’s important for everyone to take the time to learn about other cultures so that you can … END_OF_DOCUMENT_TOKEN_TO_BE_REPLACED