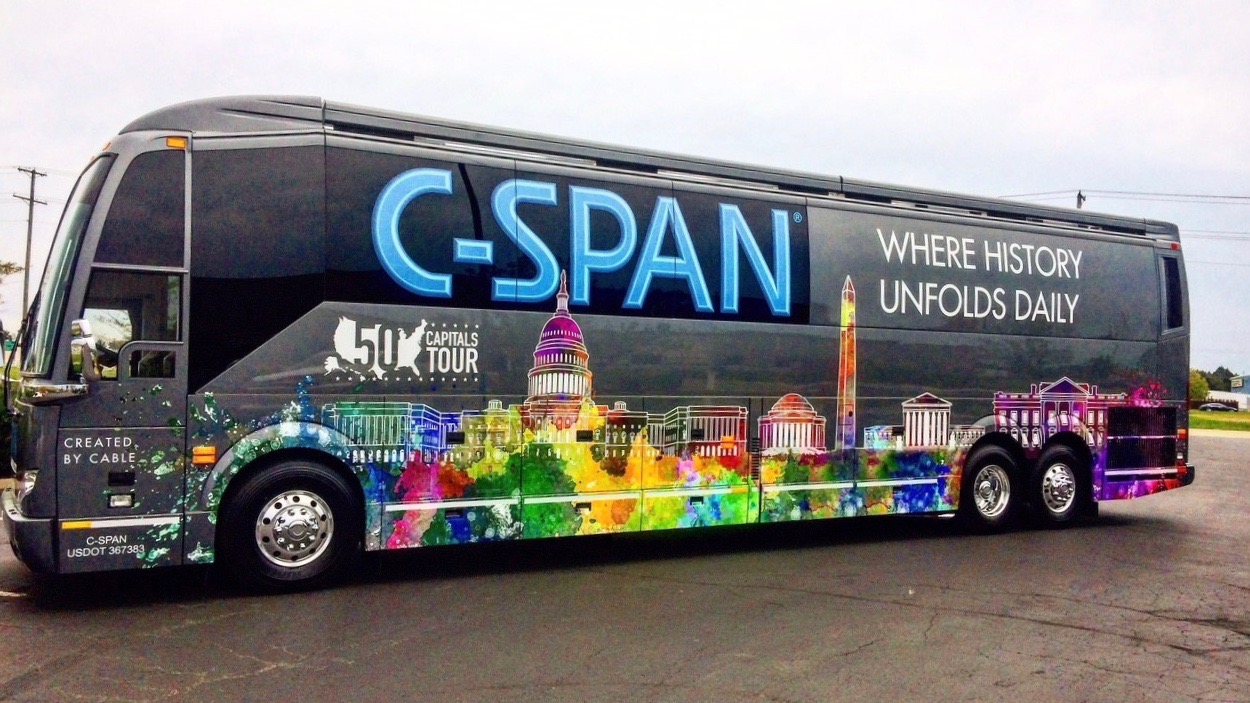 As part of its 50 Capitals Tour and in partnership with Comcast, C-SPAN is bringing its educational motor coach to Washington. The bus will be in Olympia and Seattle from March 27-30, and in Spokane and Coeur D’Alene on April 2.

Washington Gov. Jay Inslee will tape an interview aboard the bus on March 28 for C-SPAN’s signature morning call-in program, “Washington Journal.” The program will air the morning of March 29 on C-SPAN.

C-SPAN is also hosting a StudentCam competition in Washington. C-SPAN will honor Issaquah High School student Rebecca Craig on March 29 for her winning entry in C-SPAN’s annual student video documentary competition, StudentCam. During the visit, C-SPAN will present a StudentCam certificate of merit to the students during a ceremony of classmates, teachers, family members and elected officials. The winning video will also be viewed during the congratulatory event.

Each year, since 2006, C-SPAN partners with local cable providers in communities nationwide to invite middle school students (grades 6-8) and high school students (grades 9-12) to produce short documentaries on a subject of national importance. This year, students addressed the theme, “The Constitution & You: Choose a provision of the U.S. Constitution and create a video illustrating why it’s important to you.”

In response, C-SPAN received a record of 2,985 video submissions from over 5,700 students in 46 states and Washington, D.C. One hundred fifty students and 53 teacher prizes were awarded, totaling $100,000 in prize money. Visit www.studentcam.org to watch all the winning videos for 2018.

About C-SPAN and the Bus

To launch its newly built Bus, C-SPAN embarked on a “50 Capitals Tour” in September 2017 and is heading to every U.S. state capital, culminating in November 2018 for the 25th anniversary of the Bus program. Throughout this 14-month tour, the C-SPAN Bus will open its doors at each state capitol to welcome visitors and interview elected officials during C-SPAN’s signature morning call-in program, Washington Journal. C-SPAN Representatives will also gather video responses from visitors as part of its “Voices from the States” – an opportunity for visitors to share viewpoints on state issues and what they think Washington leaders should do to address local concerns.

We opened a new Xfinity store in Spokane Valley today at the Evergreen Crossing shopper center and are remodeling our existing retail location in Spokane. Our … END_OF_DOCUMENT_TOKEN_TO_BE_REPLACED

Each year we recognize top high school students in the state through our Leaders and Achievers scholarship program. This year we awarded $105,000 in … END_OF_DOCUMENT_TOKEN_TO_BE_REPLACED