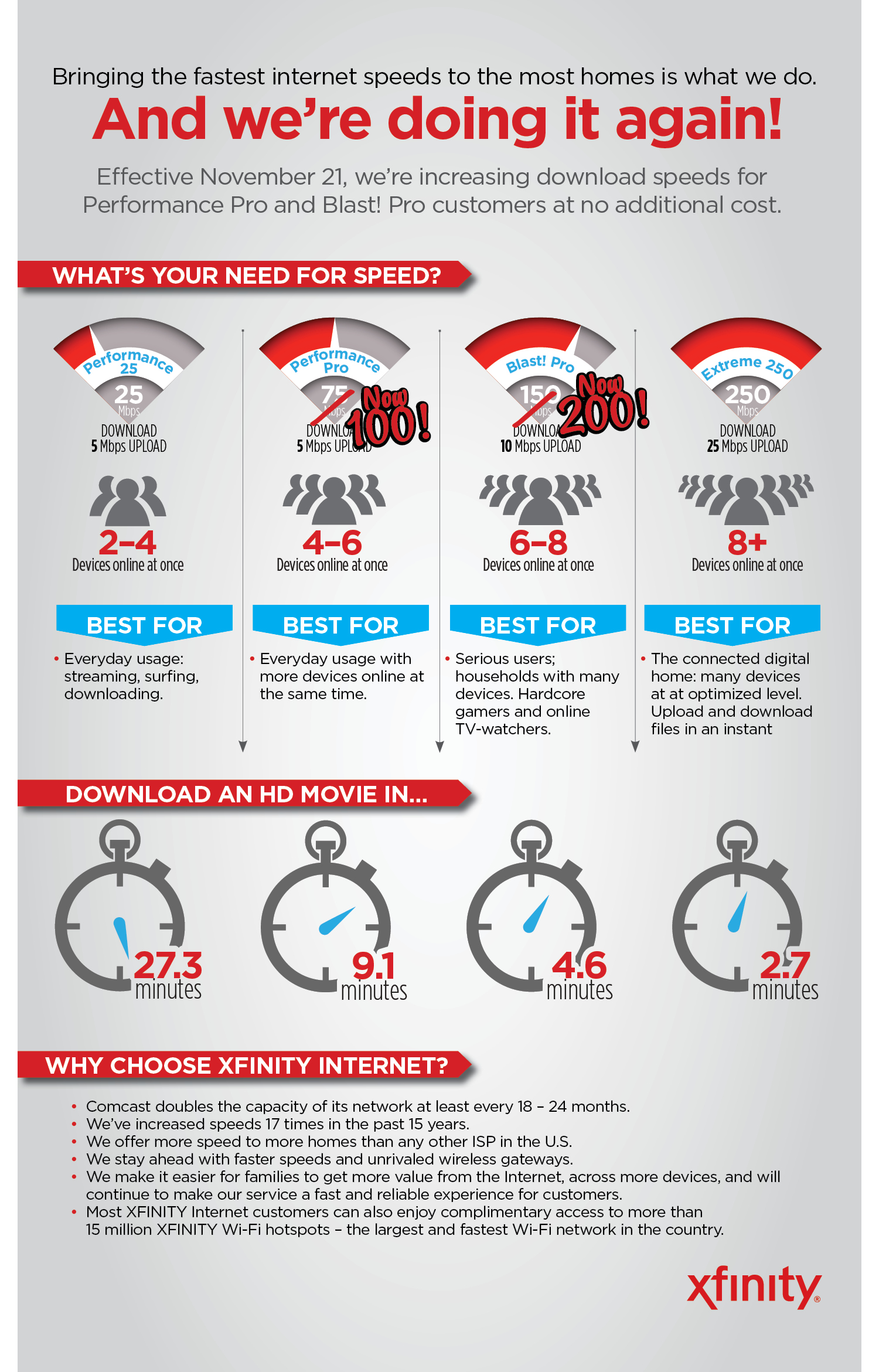 Comcast today, Nov. 21, 2016, announced it is significantly increasing the speeds of its most popular Xfinity Internet speed packages – Performance Pro and Blast Pro – for both new and existing customers in Washington State at no additional cost.

“Every day, we’re in our communities upgrading and expanding our facilities and expanding capacity to bring our customers faster speeds, so it’s exciting to be able to announce yet another speed increase to give our customers a faster online experience,” said Kyle McSlarrow, Regional Senior Vice President of Comcast’s Washington Region. “We know our customers want reliability and speed, which is why we monitor signals 24 hours a day and why we have repeatedly increased speeds year after year.”

Together with other technology and network deployments since 2010, Comcast will have invested $1 billion in Washington to upgrade reliability and capacity, deploy new gigabit services and reach new residential and business customers. Comcast delivers the fastest speeds to the most homes in the country and has increased speeds 17 times in the last 15 years, now delivering speeds in most of Washington from 10 Mbps up to 2 Gbps for residential customers and up to 10 Gbps for business customers.

In addition to increasing speeds for its customers, Comcast continues to offer the fastest in-home WiFi gateway, and most Xfinity Internet customers can enjoy complimentary access to more than 15 million Xfinity WiFi hotspots nationwide by selecting “xfinitywifi” from the list of available networks on their laptops or mobile devices and entering their Xfinity ID or email and password. Hotspots can be found by either downloading the Xfinity WiFi App, available for free on iOS and Android devices, or by visiting the hotspot finder map on www.xfinity.com/wifi.

Like the infographic above, the following offers additional information about speeds and you:

We are proud to name Shakira Shanks as the new Director of Customer Experience in Washington, where she will oversee customer experience for all lines of our … END_OF_DOCUMENT_TOKEN_TO_BE_REPLACED

We are proud to unveil our next Lift Zone project here in Washington state, a partnership with  YWCA Seattle | King | Snohomish to support four Puget Sound area … END_OF_DOCUMENT_TOKEN_TO_BE_REPLACED

“It’s important to recognize every ethnic group. I think that it’s important for everyone to take the time to learn about other cultures so that you can … END_OF_DOCUMENT_TOKEN_TO_BE_REPLACED