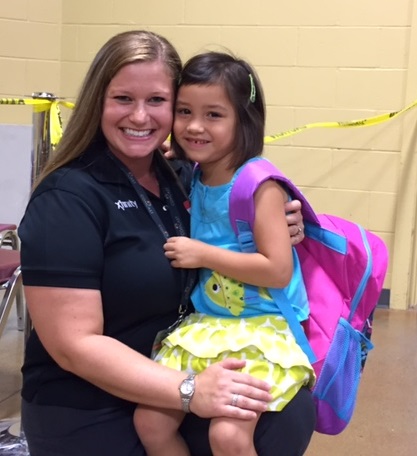 The numbers are astounding and speak to the high need in the Inland Northwest communities.

The line to enter the back-to-school event stretched three blocks at its peak. Volunteers distributed nearly 1,000 backpacks in the first hour. At the end of the day, more than 5,000 backpacks (full of grade-appropriate school supplies) and 15,000 individuals walked through the Salvation Army of Spokane facilities on Aug. 20.

It was a first time Comcast partnered with the Salvation Army of Spokane on the event known this year as the Backpack for Kids Resource Fair Powered by Comcast. A contingent of Comcasters hailing from Spokane volunteered at the event and included Kirsten Bowman, Leo Sutliff, Ciara Kosse, and Ken Watts. Terry Davis and Diem Ly from the External Affairs team also attended.

Kirsten Bowman said this of her time spent among the families and children preparing for school: “I wanted to be a part of the Backpack For Kids Resource Fair Powered By Comcast because every kid deserves to have the proper supplies for school,” she said. “Seeing the smiles on their faces, and how excited they were for the upcoming school year, made me hopeful for not only their future, but for the future of this community as well.”

There may be a high need in the Spokane area, but like these Comcasters, there are community stakeholders who are involved and invested.

Note: the backpack giveaway has been supported for years by Cenex Zip Trip, who suffered a loss in their business family just before the event. Click here for a story in the Spokesman-Review about Ian Johnstone.

This week, Comcast announced a new development to help some Washington residents apply for free Internet service through the Federal Government’s Affordable … END_OF_DOCUMENT_TOKEN_TO_BE_REPLACED

Representatives from Evergreen Goodwill, students, instructors, and leaders from Seattle and King County joined Comcast today to celebrate the opening of an … END_OF_DOCUMENT_TOKEN_TO_BE_REPLACED

We are pleased to welcome Conor McCarthy to the Comcast family as our new director of government and regulatory affairs in Washington. Drawing from his more … END_OF_DOCUMENT_TOKEN_TO_BE_REPLACED