High-Speed 2go debuts Sept. 1 in Whatcom and Skagit Counties
Lynnwood, WA (Aug. 28, 2009) – Comcast’s Whatcom and Skagit County customers are the first in the state and among the first in the country to have access to Comcast’s High-Speed 2go fourth-generation or 4G wireless high-speed data service, the company announced today.

Comcast will begin marketing the service, which offers the fastest available wireless Internet in the nation via wireless data cards, in the two counties beginning Sept. 1. 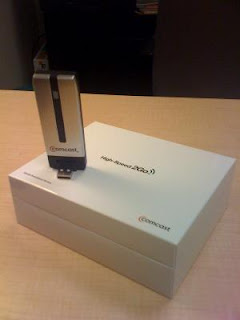 Comcast is selling High-Speed 2go bundled with one or more of its popular Internet, phone and television products, providing mobile broadband where ever and whenever customers need to be connected.

“In today’s world, consumers don’t want to be disconnected for even a minute and now Comcast provides wired and wireless access – a combination consumers won’t want to live without,” said Cathy Avgiris, senior vice president and general manager for wireless and voice services at Comcast.

Comcast also is selling High-Speed 2go to small-to-mid-sized businesses through Comcast Business Services sales teams. As the nation’s largest video provider, largest residential ISP and the third-largest residential phone provider, Comcast now has the ability to provide wireless mobility to consumers in a combination that is both competitive and differentiated from any bundled services on the market today.

Comcast is selling wireless data services following its investment in Clearwire in November 2008. Comcast’s 4G service will be provided via the Clearwire network, and its 3G service will be provided by Sprint’s nationwide 3G network. Comcast is one of the first investors in Clearwire to bring a service to market and expects that it will continue to add value to existing bundled products.

In addition to Whatcom and Skagit Counties, Comcast High-Speed 2go is available in Portland and Atlanta. The company plans to launch the service in Seattle beginning late this year.

Are you a business Looking to grow in 2020 and beyond? At Comcast Business in Washington state, we service companies of all sizes and across all industries, … END_OF_DOCUMENT_TOKEN_TO_BE_REPLACED