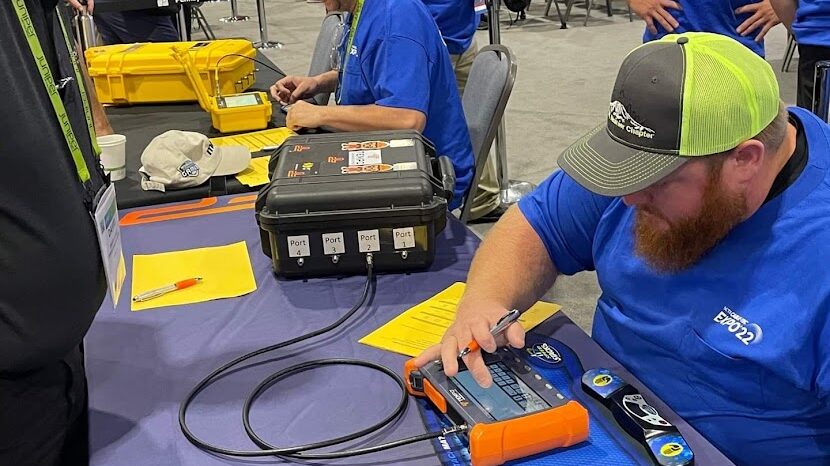 “Honestly, I went in not expecting to win anything and just wanted to place in a single event. That was all I wanted. So, five medals in events and second place were not what I was expecting. It was a really cool feeling to walk away with,” Hawk said when talking about his medal win.

The International Cable-Tec Games brings together local winners from all around the world to compete against each other in events that measure their technical cable abilities, such as cable splicing and meter reading, and demonstrate their knowledge, like cable Jeopardy. The Games consist of different events – testing mental and physical abilities and determining the world’s most-skilled and knowledgeable technicians.

“You’re going up against the best of the best around the country and around the world. As confident as you are in your own abilities, it’s humbling to go up against those kinds of people,” said Hawk.

“Tom’s performance was outstanding. It was his first time in the International Games and the competition was intense as he competed among several long-time veteran contenders,” said Craig Bunker, Technical Operations Manager, Comcast.

An experienced and skilled technician, Hawk has worked for Comcast for 15 years – spending the past six as a Network Technician. He is a relative newcome to the Cable-Tec Games though and has quickly excelled. This year was only Hawk’s second time taking part in regional Games and his first time in international competition. He qualified for the International Games by placing first overall in the Mountain Rainier Region, which encompasses the entire state of Washington.

We’re extremely excited about Tom’s accomplishment and proud to have him as part of the Comcast team here in Washington. He plans to continue to compete in the Cable-Tec Games and we can’t wait to see the success he will have in the future.

Comcast has opened a new Xfinity store in Lacey to meet the needs of its local customers in Thurston County. Located at 4104 Martin Way East, #106, Olympia, WA … END_OF_DOCUMENT_TOKEN_TO_BE_REPLACED

Small businesses owned by women and people of color in King and Pierce Counties, may now apply for a $10,000 grant from the Comcast RISE Investment Fund. … END_OF_DOCUMENT_TOKEN_TO_BE_REPLACED