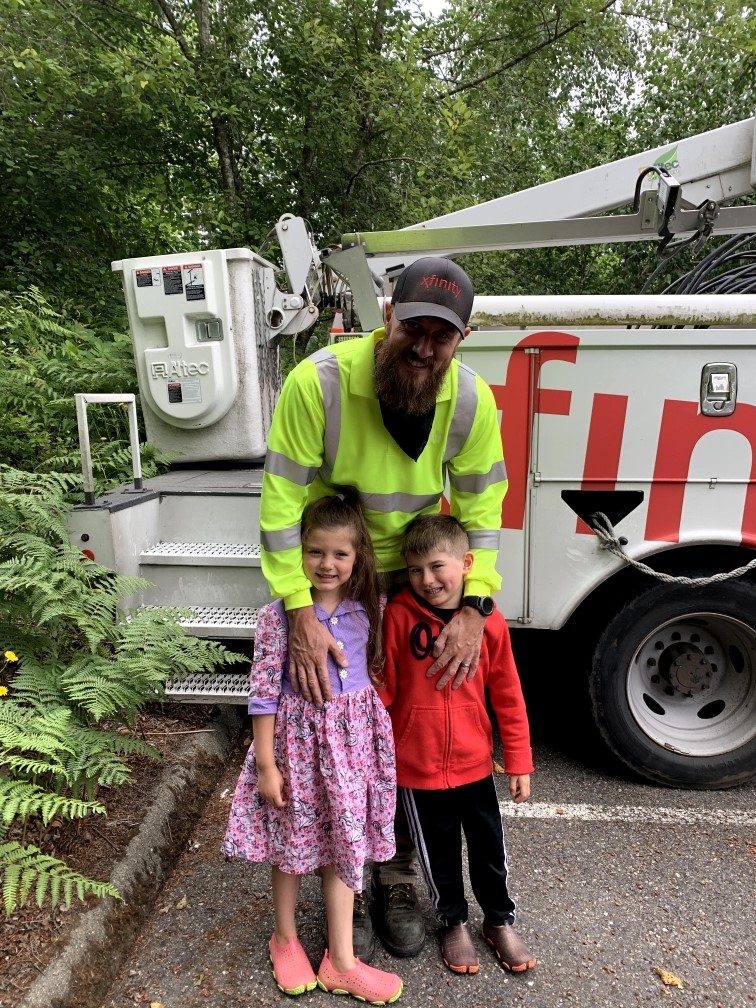 Comcast technicians are out in the community every day – doing installs, making repairs, and serving our customers. While they are on the job, our technicians have a unique opportunity to make a positive impact in the communities where they work and live, which go above and beyond their jobs.

Recently, one of our technicians was in the field and came upon a situation where he had the chance to help someone who was in a dangerous and difficult situation. We are proud to share his story of being a good Samaritan while on the job.

Technician Devin Fernandez was working in Lacey on a hot day in July when he saw a 65-year-old woman walk up to the metal retracting gate of a community and enter the code to open the gate. Unfortunately, the gate moved more quickly than she anticipated, and it trapped her in between a brick wall and the gate, breaking her arm in the process.

Devin moved quickly, immediately calling 911 and getting out of his truck to help her. He then jumped over a brick wall to get to access a keypad which would allow him to get the gate open and off the woman. She told him the code for the gate and he was able to enter the code to get it to open and move it off of her. Even though the gate started to move on its own, he still had to push as hard as he could to get the gate off her arm to free her before she was further injured.

He was able to free the woman from the gate and take her into the shade on the nearly-100-degree day. He gave her a bottle of water and waited with her until the fire department was able to arrive.

The woman recovered and Devin was able to continue his work that day, serving customers. He was glad he was there to help her and jumped into action as he thinks the situation could have been much worse had he not been there and been able to help.

Devin was able to lean on the safety training practiced and maintained by Comcast’s technical operations team. He specifically relied on one of the many safety techniques our technicians are taught – “Assess the Situation,” which the essence of is to assess if it is safe to approach a situation and engage, then making sure the surroundings are not presenting a danger to the technician and finally engaging and seeing if they should call 911 or not. Additionally, Devin has a nursing degree which helped him in the situation.

Devin’s supervisors took note of and were proud of the action he took.

“It was impressive to see that Devin was able to have the presence of mind and enact in purposeful action to deal with an overwhelming situation,” said Marc Mastin, Senior Director Network Maintenance, Comcast Washington. “Our impact spans far beyond our paying customers and expands out to the communities we live in and serve, and we are proud of how he represented himself and Comcast.”

Whether it is installing services, running a new cable line to your home, or helping with an in-home issue, our technicians are there to lend a helping hand. And when it comes to taking positive actions to help the community, we have you covered there too.

Comcast has opened a new Xfinity store in Lacey to meet the needs of its local customers in Thurston County. Located at 4104 Martin Way East, #106, Olympia, WA … END_OF_DOCUMENT_TOKEN_TO_BE_REPLACED

Small businesses owned by women and people of color in King and Pierce Counties, may now apply for a $10,000 grant from the Comcast RISE Investment Fund. … END_OF_DOCUMENT_TOKEN_TO_BE_REPLACED